The Garmin Approach R10 and the FlightScope Mevo Plus are both reasonably affordable launch monitors that work indoors and outdoors.

On the subject of affordability, it’s worth mentioning that the Garmin Approach R10 is about as cheap as it gets, with an initial recommended selling price of $600. The FlightScope Mevo costs substantially more, with a recommended selling price of approximately $2,000. Despite this notable discrepancy in price between the two units, it’s worth keeping in mind that top-quality launch monitors generally start at about $10,000. Based on this reference point, both products can be classified as affordable. 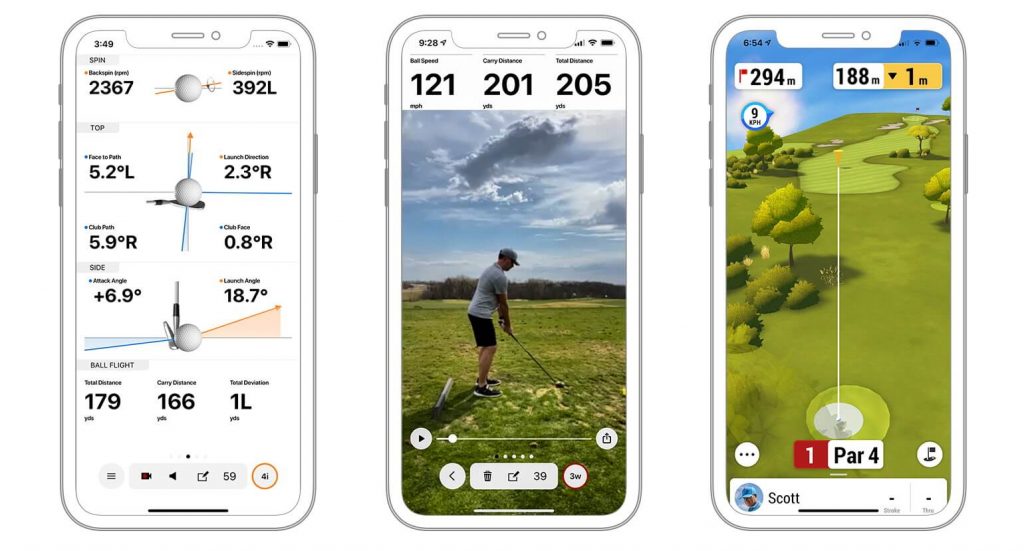 Aside from being one third of the price, the biggest advantage that the Approach R10 has over the Mevo Plus is access to Garmin’s subscription service, Home Tee Hero.

Home Tee Hero costs about $100 per year, and it gives you access to 3d modeled versions of all 42,000+ golf courses in Garmin’s database.

Admittedly the graphics aren’t particularly amazing, but they are good enough to give you a feel for the course, and you can certainly have a great time playing so many courses from the comfort of your home.

Said simply, this means the Approach R10 can detect if the clubface is open, closed, or square at impact.

Club Path Angle = “Club Path is the direction the clubhead is moving (right or left) at impact and is measured relative to the target line.“

Interestingly enough, you can actually access these two data points on the Mevo Plus, if you pay for the Mevo Pro add on, which costs an extra $1000 (approximately).

The only issue here is that the clubface angle and club path angle metrics calculated by the Approach R10 aren’t particularly accurate. So while this might be a key difference between these two products, the information simply isn’t accurate enough to serve as a dealbreaker when choosing between the Approach R10 and the Mevo Plus.

3) The Approach R10 Is A Fraction of the Cost

Simply put, the Garmin Approach R10 is significantly cheaper than the FlightScope Mevo Plus. To put this in perspective, the Approach R10 costs a touch more than a new driver. The Mevo Plus costs about the same as an entire set of clubs, including driver, fairways woods, irons, wedges and putter.

In other words, the Approach R10 is very well priced. It might not be perfect, but it is very good value for money, despite its flaws.

The FlightScope Mevo Plus is about on par with the SkyTrak (competiving indoor launch monitor). That is to say that it’s a good quality launch monitor in the $2,000 price bracket.
The main reason the Mevo Plus is better indoors is because of the readings that you are likely to get. It does a better job of measuring:

The ability to measure each of the metrics mentioned above more reliably than the Approach R10 makes the Mevo Plus the better product overall.

If you scour through the reviews of the Mevo Plus online, you should notice a very common trend.
Most players are very happy with the accuracy of the unit when measuring shot data outdoors. In most cases, you should find that the Mevo Plus mimics your shots on the driving range with surprisingly high accuracy.

One of the main reasons the Mevo Plus is more accurate outdoor rather than indoors is sunlight. In essence, the radar technology functions best when the lighting conditions are perfect.

Lastly, you might also want to check out this video comparison of the FlightScope Mevo Plus vs the GC Quad, which is generally considered one of the most accurate launch monitors available on the market. The conclusion of the video is that the Mevo Plus actually holds its own, giving readings that are comparable to the GC quad in most cases.

One minor annoyance of the Mevo Plus is that it functions best with iOS (Apple Products). If you have an iPhone/iPad, you can unlock:

Conversely, if you have an Android device, you lose access to all of these bonus features indicated above.

It is important to clarify that 3 main FlightScope apps are available on Android and iOS (FS Mevo Golf, FS Skills, FS Golf). It is simply the 5 extra simulated golf courses and 17 bonus practice ranges that are limited to iOS and unavailable on Android.

It’s important to understand that neither of these products is perfect. The Garmin Approach R10 works pretty well outdoors, but it has some issues with accuracy indoors. In particular, the clubface angle and club path angle measurements come up a bit short. You can’t truly trust these two particular metrics with the Approach R10.

However, the Approach R10 is very good value for money. It’s a portable launch monitor that can vastly improve the information that you have access to during outdoor range sessions. It can also make practicing at home much more pleasurable if you already have a golf mat and a golf net and you just need a simple indoor launch monitor to finish your setup.

The FlightScope Mevo Plus is ultimately the superior product for indoor use specifically. It might not pick up every ball, and fluorescent lighting can throw the readings off slightly, but for the most part, it does a better job as an indoor launch monitor, because the readings are superior to the Garmin Approach R10.

With the Mevo Plus, you can spend time at your ‘indoor driving range’ or playing virtual courses, knowing that for most measured shots, the accuracy is within 90-99%. Admittedly this is not perfect, but for a $2000 launch monitor, it’s about as good as it gets.